The current epidemiological situation of ASF has triggered the alarm in the main pork producing countries, which have improved their biosecurity measures and developed various strategies to prevent, contain or eradicate it, as needed. Several countries have intensified inspections at border ports, which has allowed fresh pork and byproducts coming from China to be seized.

Given the above, the following question arises: considering the relevance of the export market for Chile, where pork is the leader and holds the fifth place worldwide, what can we do to protect ourselves from this disease? 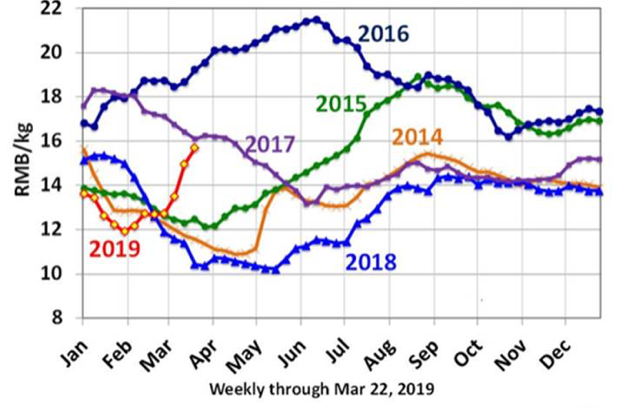 The price in China has increased by 21% over the last month, most likely due to speculation. It is believed that this year the price will break the record set in 2016. Source: Global Agritrends.

Given this scenario, there is no doubt that we are all being called upon to work together, under the leadership of the Chilean Agricultural and Livestock Service (SAG) and with the support of ChileCarne and the active participation of producers and suppliers of imported veterinary medicines and supplies. In this context, SAG and ChileCarne have focused their efforts on border port control, especially in airports, where a prevention campaign was implemented reminding travelers of the prohibition to enter the country with foods of meat origin.

As an Association, we monitor the global expansion and distribution of the main viral diseases for poultry and pig health.

We have also conducted regular meetings with most suppliers of veterinary medicines and supplies imported from China to invite them to participate in a joint prevention program called “Biosecurity REP,” which aims to provide guarantees that the products comply with biosecurity requirements to mitigate the risk of introducing the ASF virus into Chile. We can already report that we have had good reception and the program began operation on April 15. 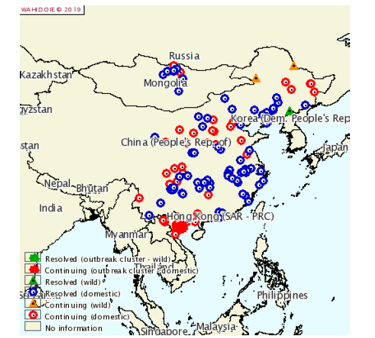 China’s production has been strongly impacted by ASF, as they have not been able to control it from spreading. Source: Global Agritrends.

One of our main recommendations is to observe biosecurity measures in farms and feed-producing factories. It is also crucial to establish special measures for the entrance of people who have traveled to countries where ASF is present. ChileCarne suggests a 5-day protection period as of departure from countries “contaminated” with ASF before entering farms or feed factories.

There is no doubt we are all being called on to stay vigilant regarding the care and protection of Chile’s animal health asset, which constitutes one of our strengths for protecting and expanding our meat exports.[:]