Global meat supply will reach 374 million tons in 2030, according to FAO and the OECD

The OECD-FAO Agricultural Outlook 2021-2030 expects global meat supply to reach 374 million tons by 2030. Herd and flock expansion, especially in America and China, added to higher productivity per animal (average slaughter weight, improved rearing and feedstuff formulas), will drive this rise. The report’s chapter dedicated to meat can be downloaded from this link to our page on meat sector legislation and documents of interest (in Spanish). Some of the main conclusions of the report are:

These projections are based on the assumption that consumer preferences will evolve following historical patterns, and that both income and prices will determine people’s diets. However, other factors that could influence meat’s outlook in the medium term are changes in consumer preferences and the increasingly rapid drop in meat protein consumption.

The emergence, although minor, of alternative protein sources such as crop- and plant-based meat substitutes, added to the automation of the labor-intensive processing, packaging (including labeling), and distribution sectors, will also impact these estimates. 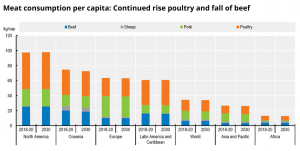