According to figures from Chilean Customs for the months of January to December 2020, Chilean pork shipments added up to USD 850 million, while the previous year they reached USD 616 million, thus showing a 38% increase from 2019. As for poultry, exports in 2020 added up to USD 382 million, while in 2019 they reached USD 419 million. It should be noted that 79% of the pork produced in Chile was exported. In turn, 28% of the chicken produced was shipped abroad, as well as 37% of turkey.

Thanks to these results, the white meat sector can make a positive balance of this period and, according to current market conditions, this upward trend is expected to continue in 2021 in spite of the difficult scenario posed by the global Covid-19 emergency and the African swine fever.

With regards to the main destination countries for Chilean pork, China positions itself first with 67% of Chilean imports, adding up to USD 572 million. It is a significant increase from the previous year when 42% of the total was exported to this country, representing USD 260 million. Japan was second with USD 120 million. South Korea ranked third with USD 108 million.

Under the current Covid-19 pandemic scenario and the changes occurring in various areas worldwide, the white meat industry will face new challenges this 2021. The sector will continue to make every effort to maintain its operations and thus ensure supply.

African swine fever continues to spread around the world

Over the past few days, two new variants of the African swine fever (ASF) have been detected on pig farms in China. Industry experts think this is due to the use of illegal vaccines against this animal disease. As for the situation in Germany, an outbreak is growing in the north of the country, particularly in Brandenburg and Saxony, where multiple carcasses of ASF-infected wild boars were found. In the meantime, 11 cases were detected in areas that the German government decided to restrict in various districts of the country. As a result of this situation, German pork exports have been severely affected. In the European Union, 2021 began with 433 ASF outbreaks in wild boars.

So far this year, the World Organization for Animal Health (OIE) has issued around 150 notifications or monitoring reports, and 70% of these refer to these two pathogens (43 to ASF and 60 to Avian Flu).

According to José Manuel Sánchez-Vizcaíno, ASF expert and professor of Animal Health at the Universidad Complutense de Madrid, “African swine fever is worse than ever,” and he adds that the current situation with the disease is out of control. 2020 was marked by its spread throughout Europe and by progress in developing a potential vaccine. Although the results analyzed so far are encouraging, there is no commercially available vaccine against this virus yet. In addition to Spain, several countries are part of the race to develop a vaccine. 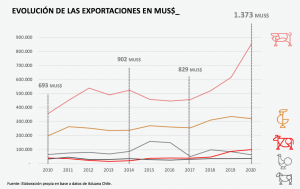